Harvest has begun and some good yields are being reported early doors, with the highest recorded so far at 3.9t /ha in Derbyshire. Conditions are good for combining and the crop is cutting well.

An Emergency Approval for Spotlight plus has been granted for Linseed seed crops, it is essential that use of product is reported to Premium Crops to fulfil stewardship criteria of the approval. Contact: This email address is being protected from spambots. You need JavaScript enabled to view it. to find out more. 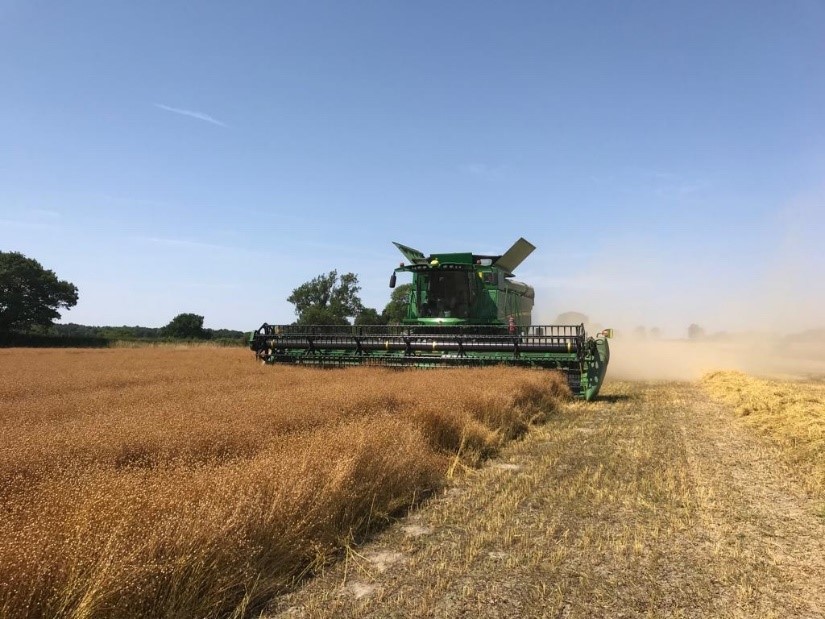 The crops have had a good flower and are looking well. As we head towards the end of June pod set is well underway, with the furthest along on-the-turn. With the showers a late flowering fungicide will help keep botrytis out the crop which can rob some yield. Some grass weeds have shown their heads late with the showers of June. On the whole winter crops are looking well. 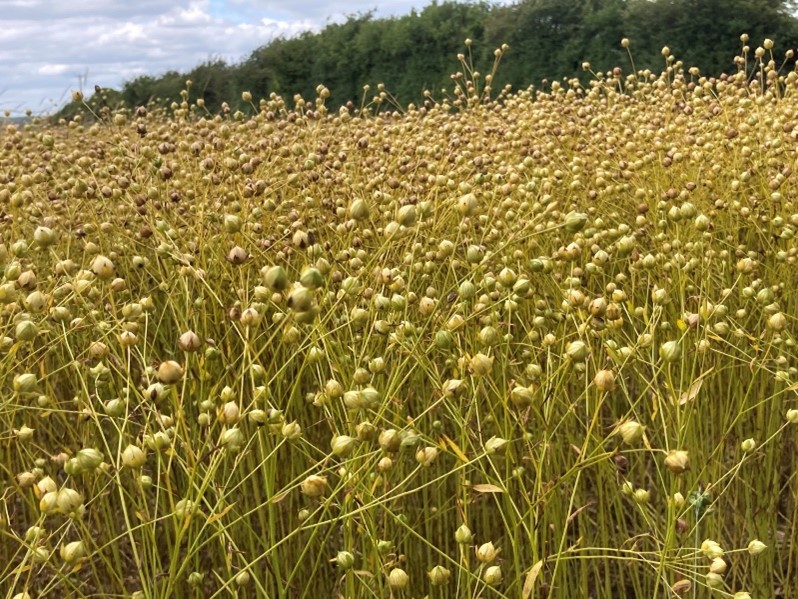 Growers should ensure timing for desiccation of commercial crops with Glyphosate is correct. Too early, when the seed is green can result in small and shrivelled grains. It is essentially to open up pods and check seed colour of a representative sample of the field. Seed should be an off-white colour and plump. 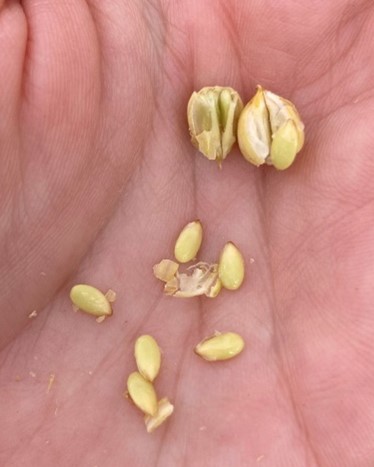 The rain has arrived just in time for the winter crops to wash in the last dose of fertiliser and help with seed set. Herbicide applications are now over, and as we head towards the end of the month flowering is coming to an end. It is important to get an end of flowering fungicide on to stop botrytis robbing yield, especially with the recent rain. 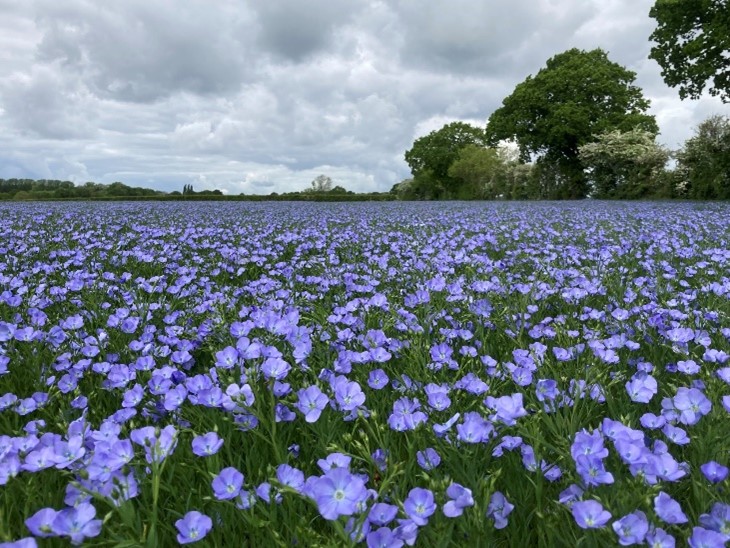 Crops are now moving on at a pace, with green-buds coming out towards the end of the month. The odd flower is even being seen. Once green-buds are seen then no further herbicides can be applied. Hopefully rain will arrive in May to wash in the last dose of nitrogen into the crops. 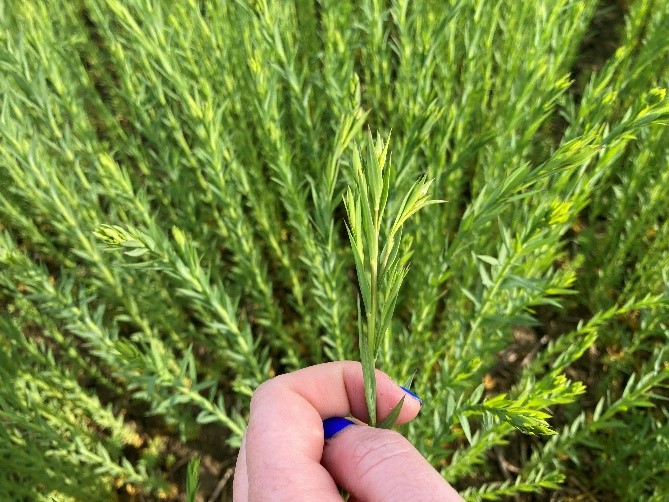 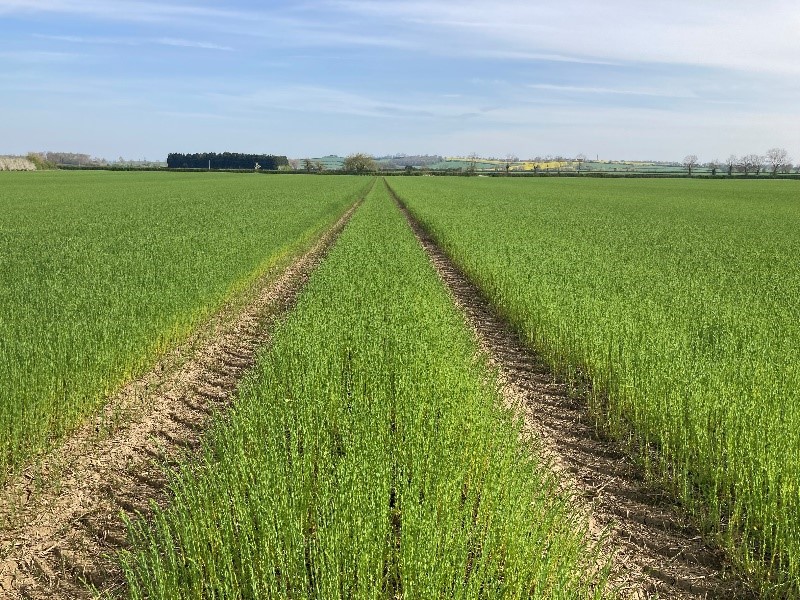 Crops are now moving on at a pace. Those recovering from pigeon damage are looking well and tillering nicely after a low dose of nitrogen which is helping them to catch-up with crops that have not been grazed. Those crops un-touched are now well into stem extension, and are probably only a couple of weeks away from starting to form green-buds. 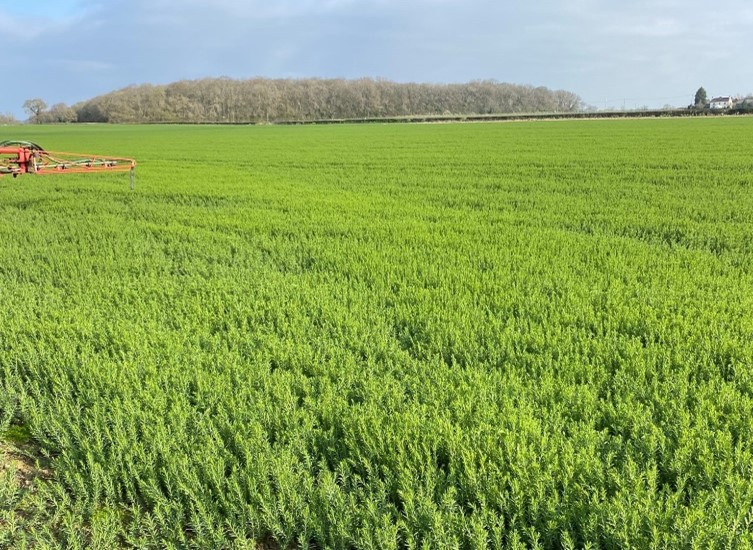 Where crops are in stem extension, DO NOT apply any fertiliser. It is better to miss the first split than to apply during stem extension, as it will not be stored for later to benefit yield, but will create tall crops with a risk of lodging. If the first timing is missed, a micronutrient application may be beneficial. Herbicide and PGR applications should be applied now, where crops have not been pigeon grazed the applications need to be made sooner rather than later before green-buds start forming. When green-buds are seen no PGR or herbicide should be applied. Crops are looking well on the whole, poppies seem to be the weed of the season but SU products are generally doing a good job. 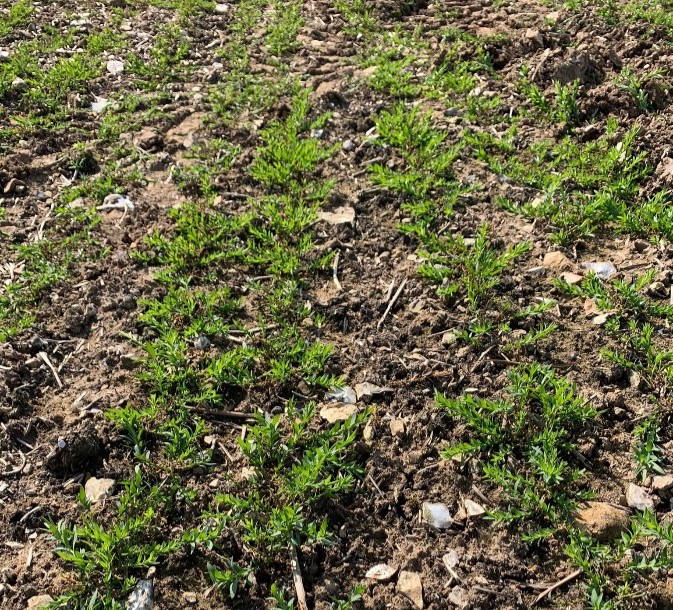 There have been no recorded crop losses this winter despite some significant frost events (-7.5 °C recorded near Winchester) - See Sencrop data below.

Interestingly, this is significantly colder than that recorded last year at the same site (-4 °C). This demonstrates that it is not the “absolute” cold that affects crops, but the “desiccating effect” of  the added wind.

The mild autumn has meant crops are looking well. Crops are well rooted and should be benefiting soil structure already with their root systems 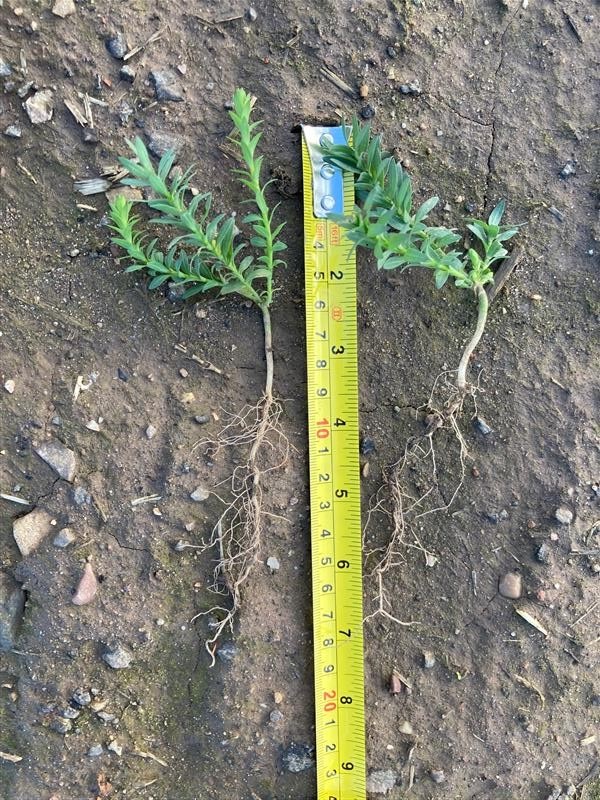 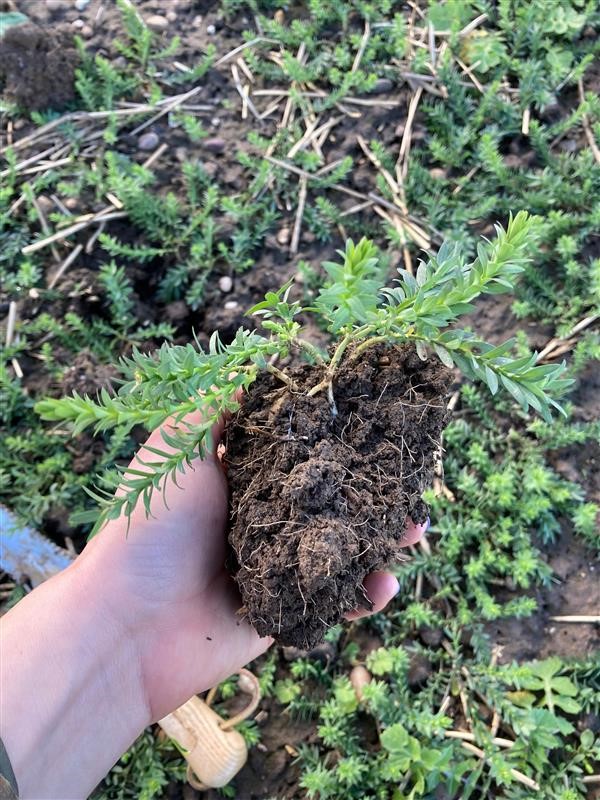 Pigeons have been moving into winter linseed crops in the new year. Put out deterrents to move them on. Winter Linseed will branch back to compensate for pigeon grazing, but it is best not to let them settle 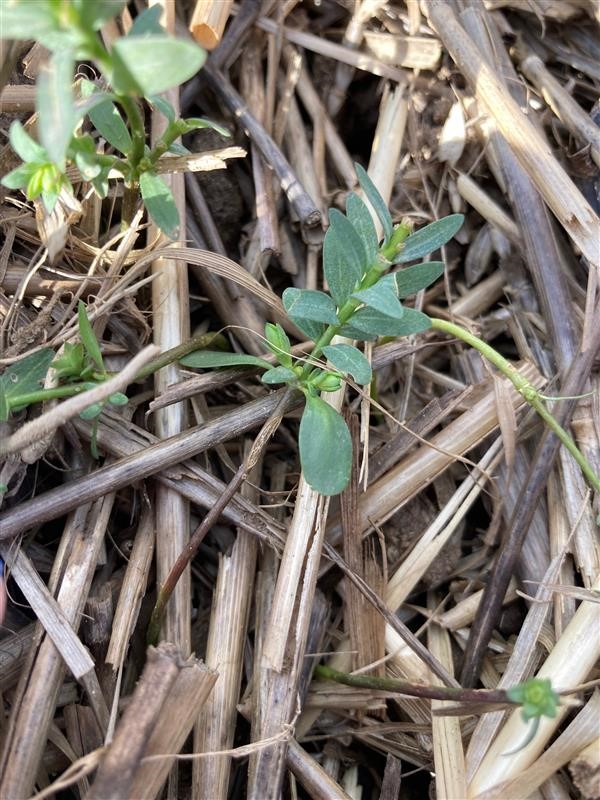 Some broad leaf weeds (BLW) are now coming through which will be dealt with in the spring. Typically volunteer Oilseed rape, Runch, charlock and groundsel are first out the blocks heading into the spring. Due to the loss of Bromoxynil the remaining BLW chemistry relies on SU chemistry- metsufluron-methyl and amidosulfuron. Where grass weeds are present these should be a priority, if not used already Centurion max EAMU is until stem extension. For other grass weeds, fop and dims exist e.g. Falcon, Fusilade, Laser etc. Nitrogen should only be applied where crops are starting to grow out of winter. A maximum of 50kg/ha is all that is needed to wake the crop out of winter, as the first split.

November has been a very mild month generally and crops have grown on well and now generally 5-7cm tall. Blackgrass is now obvious in the field and hopefully has been sprayed with Centurion Max. Fungicide applications should be made mid-November onwards as crop growth starts to slow. 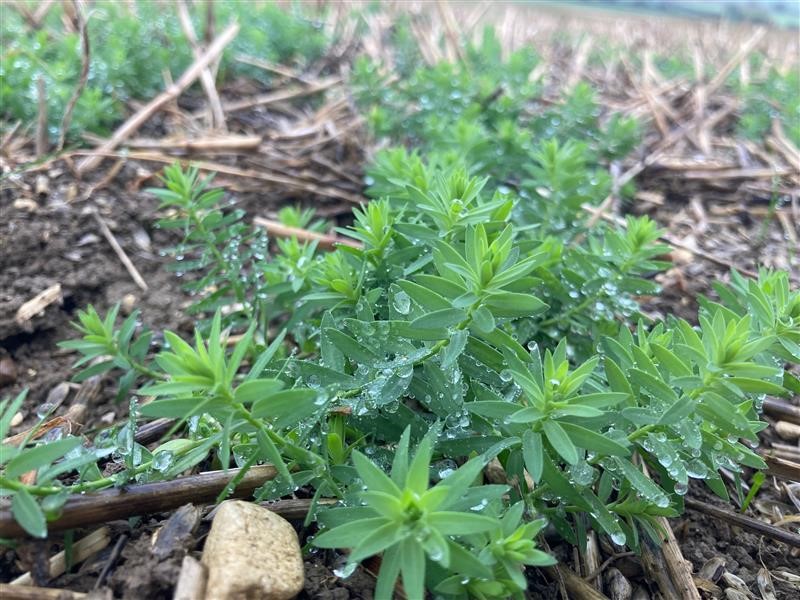 The end of November has turned suddenly cold and has even snowed, with this cold weather Crawler applications should now be made as soon as equipment can travel. Remember crops need to be healthy for Crawler applications, typically around 7cm tall and well rooted and branched. Linseed typically puts out branches or tillers in pairs over autumn. Four branches is a sign of a healthy plant and also indicates sowing date. As you can see in the picture below the second set of branches are emerging at the base of the first set of branches. 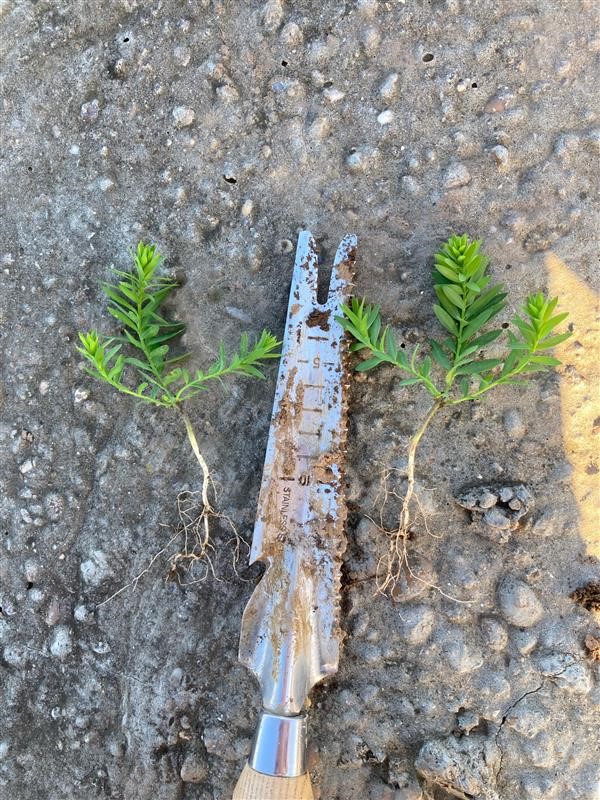 October has mercifully allowed completion of jobs which the last two seasons have made difficult. Grass weed control should be completed/ well on the way. Crops have started to grow on into the second half of October and are now around 4cm tall and starting to branch. Some later drilled crops, drilled at the start of October are putting out true leaves. 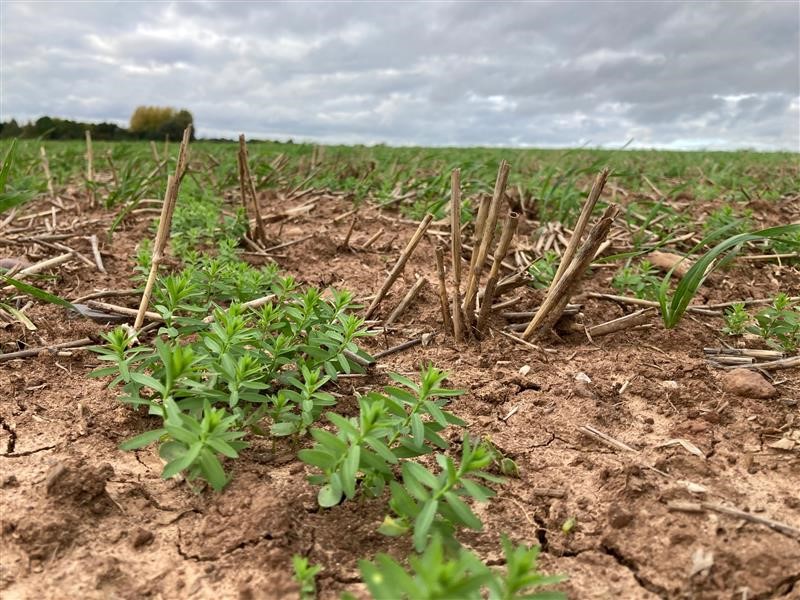 Earlier drilled crops are showing signs of disease, and a protective fungicide, normally Difeconazole, should be applied in November to stop disease spread up plant canopies. The disease is Kabitella Lincola which is a phoma like disease. Symptoms are discoloured cotyledons with grey lesions containing black pycnidia

Grass weed control should ideally be completed by November, Blackgrass seems to have germinated in the second half of October and are now about the right size for herbicides. For volunteer cereals there are Falcon and Fusilade type products, for Blackgrass Centurion max is approved on EAMU and where there is rye-grass Crawler is approved for this season on EAMU. The image below illustrates what happens when an application of Fusilade misses a patch of barley volunteers.... 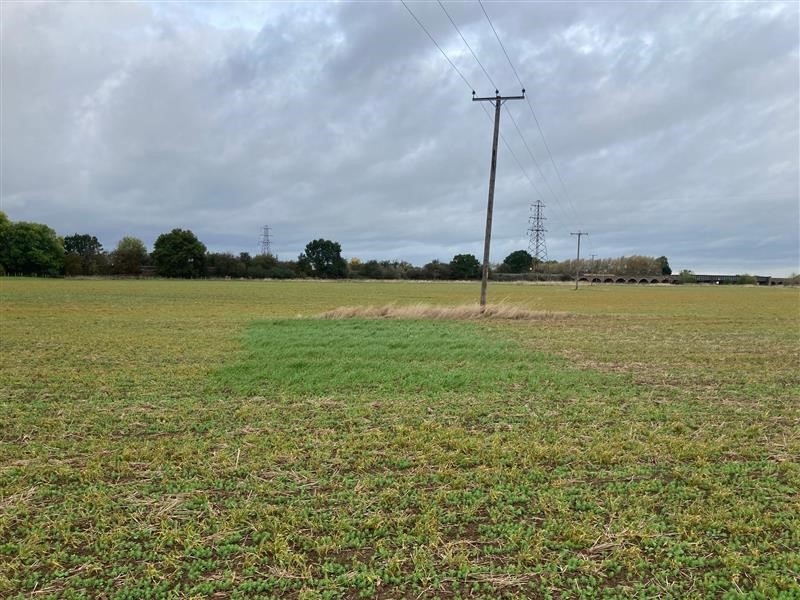 Rain arrived in October to get pre-em herbicide and crops going. Crops are starting to emerge and some are putting out true leaves now. With the rain the volunteer cereals and blackgrass have germinated and will now need controlling. There are many fop and dim herbicide approved for control of volunteer cereals, only use a low rate. For blackgrass Centurion max is the preferred herbicide once crops are 2.5cm high. 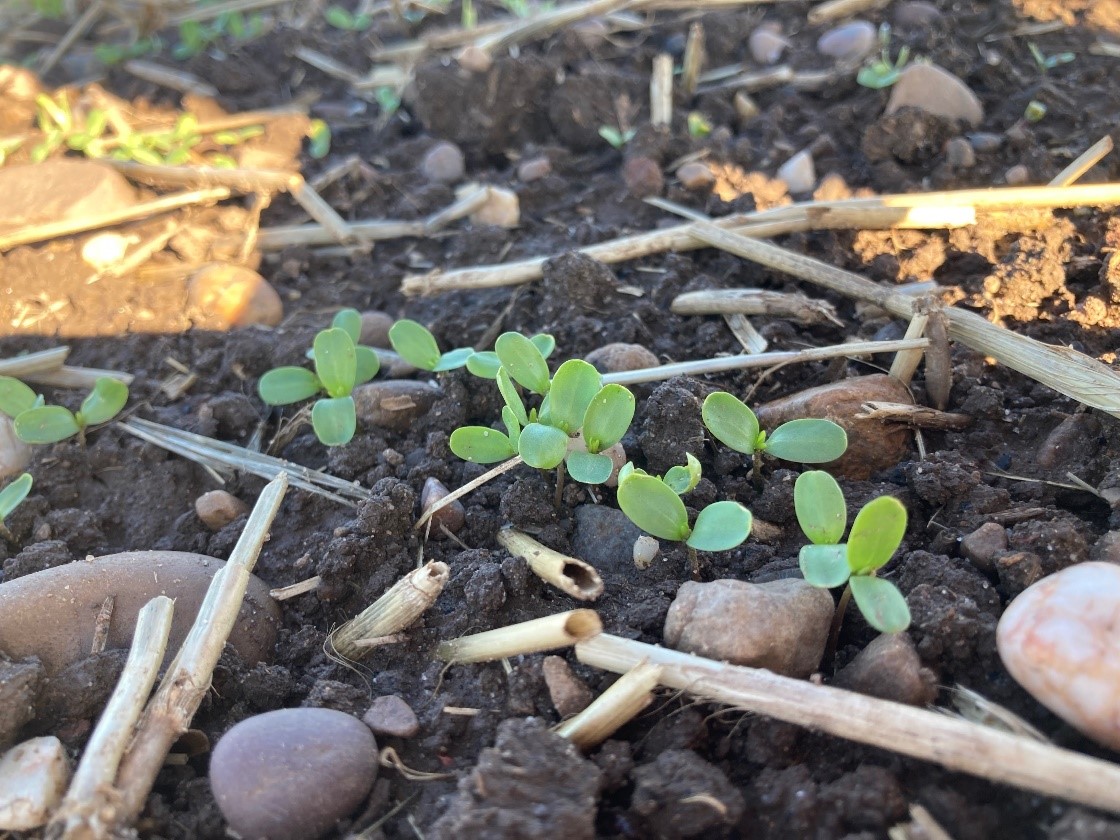 Fungicides and Crawler do not need to be considered until November. Fungicides are applied to protect crops from disease over the winter, applying too early means new growth is not protected. Crawler should only be applied to crops that have had a frost on them to slow crop growth.