Anywhere in the UK

Winter linseed can be grown on all soil types

There are a range of varieties to suit each particular soil type and situation. Varieties for 2020 harvest include Alpaga, Sideral and Volga

Typically 30 to 35 kg/ha depending on variety. The aim is to sow approximately 425 seeds/ m2

Drilling date is from early September through to early October, depending on your location ie after you have drilled your Rape, but before you drill wheat

Typically 50 kg/ha P&K
Typically 80 - 130 kg/ha N (which is nearly half that used on Rape). No seed bed Nitrogen is used; the first application will typically be March

Various sequences of products, pre and post-emergence for broad-leaved weeds and grass weed can be used on Winter linseed. Products that can be used include; Avadex, Crawler, any of the fops and dims, Bromoxynil, Callisto, Eagle, JubileeCenturion Max, etc

Winter linseed is not affected by flea beetles. Cabbage stem flea beetle that is such a problem on Rape does not affect linseed. CSFB only attack brassicas- Linseed is NOT a Brassica. Slug control is unlikely in the Autumn. Pigeons favour Rape over Winter linseed. Crops are usually only susceptible for a short period in the Spring. The powers of recovery are at least as good as Rape

A "slug survey"survey of 125 growers who grew wheat after rape and Winter linseed provided a stark contrast in slug control. Click here for more information

The main diseases of Winter linseed are Kabatellia in the Autumn, Septoria in Spring and Botrytis during flowering.

Kabatiella Linicola is a disease similar to Phoma in Oilseed Rape and poses a risk to untreated Winter linseed. Previous cropping does not influence disease incidence and control is preventative only, so all crops should receive an application of difenoconazole, metconazole and tebuconazole.

Paclobutrazol (Toprex) provides good follow up to Kabatellia control in the spring and with excellent septoria control and a PGR benefit when applied in the early spring.

Only required if problems are known to exist

Only Glyphosate can be used on commercial grain crops.  With the demise of Diquat, Premium Crops has trialled a number of desiccant products on linseed and, based on that work, the AHDB have recently gained an Emergency Approval for the use of Spotlight Plus on Seed Crops - click here to read more.

Winter linseed is not inclined to shed or shatter like rape

Winter Linseed should be ready for combining typically mid-July to early August . In the Southern half of the country this can often be before Winter rape. Regular growers of linseed will tell you that they harvest linseed faster than any other crop. How do they do this? By taking the earliest opportunity to harvest - even if the stems are still green (in fact linseed straw is MUCH less likely to cause an issue going through the combine at this stage rather than when it is "weathered" and the fibre seperates away from the stem). NEVER leave Winter linseed until after your Winter wheat.

The knife needs to be in good condition and to be sat tight on the fingers to ensure a good "shearing" action. Click here for our Winter linseed combining guide

Most combines handle linseed. However over recent years we have had occasional reports of Linseed straw wrapping around the rear rotor of CLAAS Lexion combines. Our understanding is that the rear of the non modified rotor has rubber "paddles" attached to it. Linseed straw can snag on these and end up tearing them off. This wrapping is made much worse if the straw is weathered (as above).  The modified rotor has metal paddles which prevents the wrapping.

Models built post 2013 were built as standard with a pair of Linseed rotors. A retrofit kit is available.

If you have a pre 2013 CLAAS Lexion (or intend to buy second hand) you may want to check with your local CLAAS dealer about this modification.

Because harvesting is taking place in mid-July/early August, Winter linseed straw is dry and is much more likely to be chopped on the combine than Spring linseed straw and the chopper blades are newer!

Linseed straw is exempt from the burning ban. The most common method is to either push the straw into heaps, or easier still , bale in round bales and set-light to in situ. Linseed straw burns very hot and clean with very little ash residue. Linseed straw is ideal for on farm straw burners. It is not liked by the straw burning power stations because perversely - it burns too hot!

Winter Linseed will typically be harvested at between 7.5% to 10% moisture. With the market standard being basis 9% maximum 10% most crops do not need to be dried.

If drying is required it can be handled in any system that handles OSR, with similar temperature settings. Care needs to be taken when dryng linseed on-floor or in a bin system. Linseed, being a flat seed has a very high resistance to air-flow, so the drying front can stall after about a metre or so, resulting in a hard, wet layer. To avoid this, do not dry linseed on-floor above a metre in depth, or in a bin system you will need to rotate with an empty bin. For a Protimeter Linseed conversion chart click here 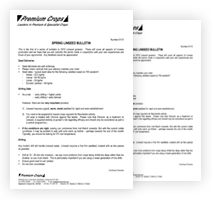 All growers and their agronomist are sent technical bulletins with more detailed agronomy information throughout the growing season.

Our technical team is always on hand to answer any queries.